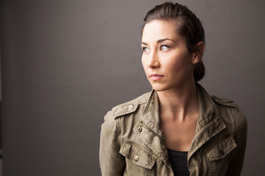 Sara Antonio is a Southeast-based actress, who has recently starred in the upcoming (Dec. 2020) faith-based drama The Reason – alongside Academy Award winner Louis Gossett Jr. and Tatyana Ali – and in Another Version of You, a romance/adventure film shot in Iceland, France and Tennessee. She has acted in films such as Hallmark’s Christmas at Graceland; Lifetime’s Night Nurse and Locked In; Hot Summer Nights; and Everyday Yeti (a selection for the Festival de Cannes), and in television appearances on Watchmen (HBO), The Righteous Gemstones (HBO), The Resident (FOX), Nashville (ABC), House of Cards (Netflix), The Inspectors (CBS) and the mini-series AHA.

She can be currently seen as the woman in Litter Robot commercials (the very funny national Stop Scooping campaign); other commercial work includes national campaigns for Geico, DIRECTV, Zaxby’s, Valvoline and Cox Communications, among others.

Sara has a background in theater, with memorable roles including Rachel Brown in Theatre Jacksonville’s production of Inherit the Wind and Clarisse McClellan in The 5 & Dime’s production of Fahrenheit 451.

Sara is a graduate of the University of Virginia, and has a master’s degree in communications from the University of Florida. She’s is a native of Fort Myers, Fla. Her father is from Jamaica and of Lebanese decent – the source of Sara’s distinctive green almond-shaped eyes.